Vim-sneak and vim-EasyMotion are a couple of Vim plugins that supercharge how fast you can move in Vim.

Both of these plugins need to be enabled via your VSCodeVim settings. To enable them, just go to Preferences, Settings search for vim sneak or vim easymotion and you'll find the switch.

Where vim-surround extended Vim’s secret language with an operator, vim-sneak does the same but with a motion: the sneak motion. As such, you can use it in combination with other operators:

Why z Instead of s?

When used in conjunction with other operators, vim-sneak uses the z because the s is already taken by vim-surround. And vim-surround is an extremely popular Vim plugin.

Vim-EasyMotion tries to simplify the use of motions in Vim by removing the need for counts. Instead of looking at a piece of code, counting in your head and using either of these combinations to perform some action:

when you trigger an motion with EasyMotion, it labels the possible targets in the whole document with a key combination that is shown in an overlay (over the text in question). Type that key combination, and you’re teleported to that location at once.

For instance, type <leader><leader>w and EasyMotion will label the beginning of all words ahead of you like so: 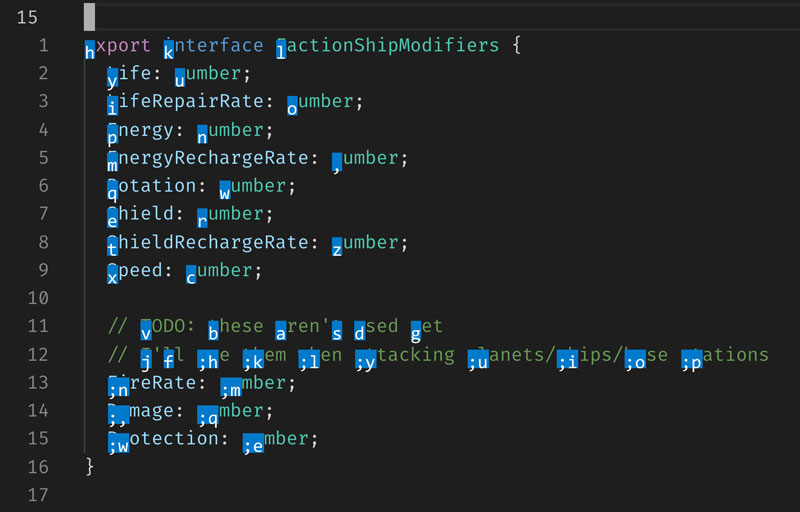 This is what happens when you trigger a motion with EasyMotion! :O

In the example of the image, typing the letter l would make your cursor jump to the FactionShipModifiers interface, while typing p would send you to the Energy property of that interface.

Or you could type <leader><leader>f' and EasyMotion will label all occurrences of the ' character in the current and subsequent lines. Pretty nifty, isn’t it?

All the motions provided by vim-EasyMotion are namespaced by <leader><leader>, and they use key bindings whose meaning is related to the core Vim motions:

EasyMotion Only Works for Moving Around

In the VSCodeVim version, the motions in EasyMotion only support moving around and can't be combined with operators. This is a feature that is supported in traditional Vim so it may be something that will come to VSCodeVim down the line.