Barbaric Monthly is my attempt at building/improving a coding project per month so that I can experiment with old and new technologies, learn ad infinitum, remain excited about the craft and nurture my passion for software development. This Barbaric Monthly is about developing a windows phone application and releasing it to market.

Wo! Time warps around me! Where did that last week go?!? I remember going to welcome my Sri Lankan colleagues on Monday, and then… monthiversay with Malin on Thursday… fast-forward to now that I’m sitting on the couch writing… sick… :)

Talking about time passing fast and unfulfilled goals, one of the objectives I had for this year was to release at least three Windows Phone 7 apps into the Marketplace, fast-forward to today (again) and how many apps have I released? 0, zero, none, null. Sad but true… so there comes Barbaric Monthly to the rescue! This month I will stop playing around, no more half-baked apps, no more exercises, this month I will build [at least] a WP7 app - albeit a simple one - and I will go through the whole process of releasing it to market.

I have not quite thought yet what is exactly what I am going to build this time, but please follow along because I will be revealing more details in my next post on these series.

P.S: Did you have the change to see Nokia’s event on Wednesday? Wasn’t that Nokia Lumia 920 beautiful? Way to Go Nokrosoft! 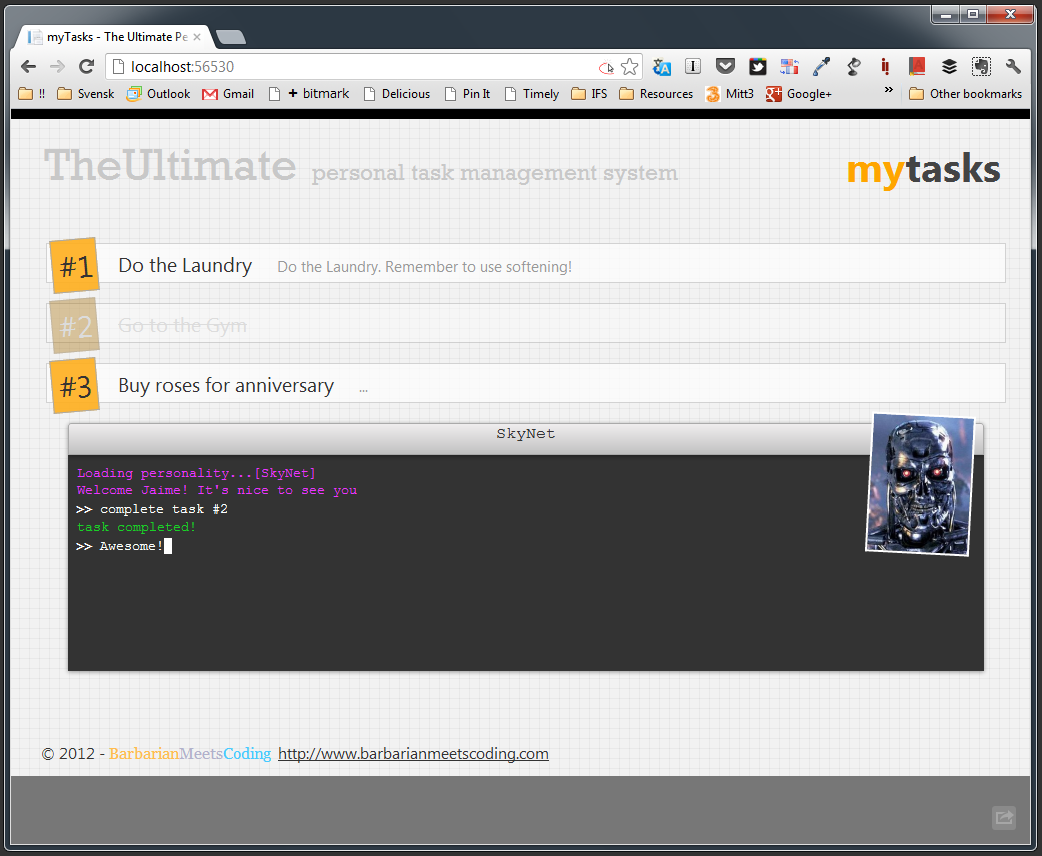 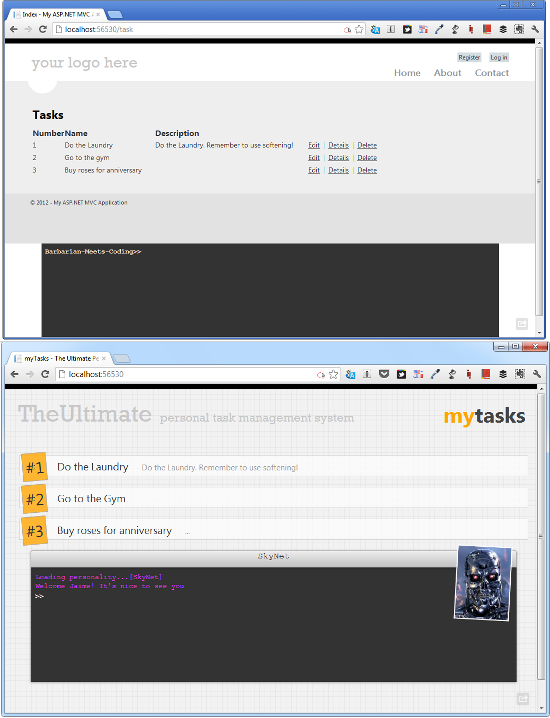 Omg this week has been hectic! Sprint at work is nearing its end and I have been multiclassing Code-Wizard/ScrumMaster, which basically means two jobs for the price of one. I have tried to make time to work some magic in Barbaric August, but I think I have barely managed to scrape 7 hours for it these last two weeks. I do not honestly know how the heck does Uncle Bob find those extra 20 weekly hours to practice the craft but kudos to him :). 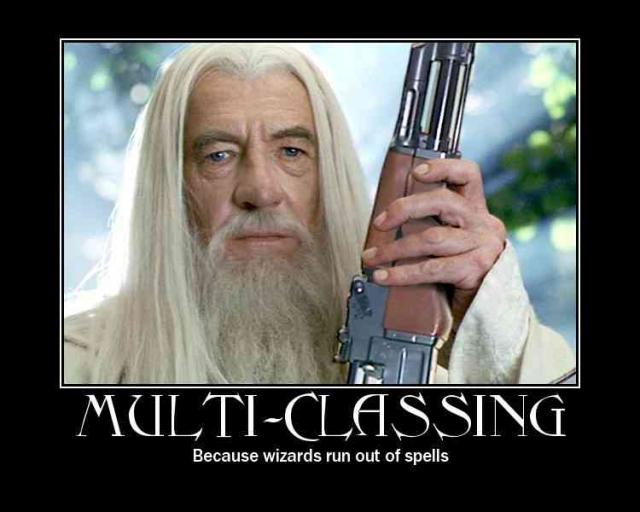 I did work a little today, and I am happy to say that my Barbaric Monthly SkyNet has now a proper data access layer! (Did I somehow forgot to mention that I have been doing everything in memory all this time? xD) It is surprinsingly easy to hook up an ASP.NET MVC website with a database using Entity Framework Code First. I substituted my fake and temporary Unit of Work Context for a DbContext and created a custom Database Initializer to seed the database with some fake data and voilá, two steps and you got it, all unit tests passing and everything working beautifully.

And I’m afraid that… that was pretty much it for today fellas! I have one day remaining to finish the prototype and make a video wrap up. What?? A video what? Yeah, you read it right, I have planned to record a nice wrap up video after every Barbaric Monthly, it may be catastrophically horrible, but as a friend of mine told me today: ”No one remembers a coward”. Back with you soon…

P.S: If you get the chance take a look at any of these books by @JulieLerman, she’s the go to person for anything Entity Framework related:

I just loved this post by Scott Adams (Dilbert). Here’s a fragment:

Whenever you see the x-factor in someone's output - that little extra something that turns the good into the awesome - it's a marker for intrinsic motivation. Monetary motivation plateaus at the point you think your work equals your pay. For most people, that happens when the product is good but not awesome. To get to awesome you need to think you might be changing the world, saving lives, redeeming your reputation, attracting the mate of your dreams, or something else that is emotionally large.

One of my techniques for staying motivated is that I put everything I do in the context of how it might improve the entire world, or at least some subset of it.

Go, go and subscribe to his blog, he has a lot of interesting things to say.

Setting the mood for writing :).

5 days left of Barbaric August and it looks like I may be able to have something that remotely, vaguely, nearly seems to work. It is a starting point anyhow, and I feel it will spawn many interesting branches of development in future Barbaric Monthly’s to come.

Since my last update I was able to put some hours after work and build Skynet!! Or more likely something with the AI prowess of a stone. See the evidence by yourself below: 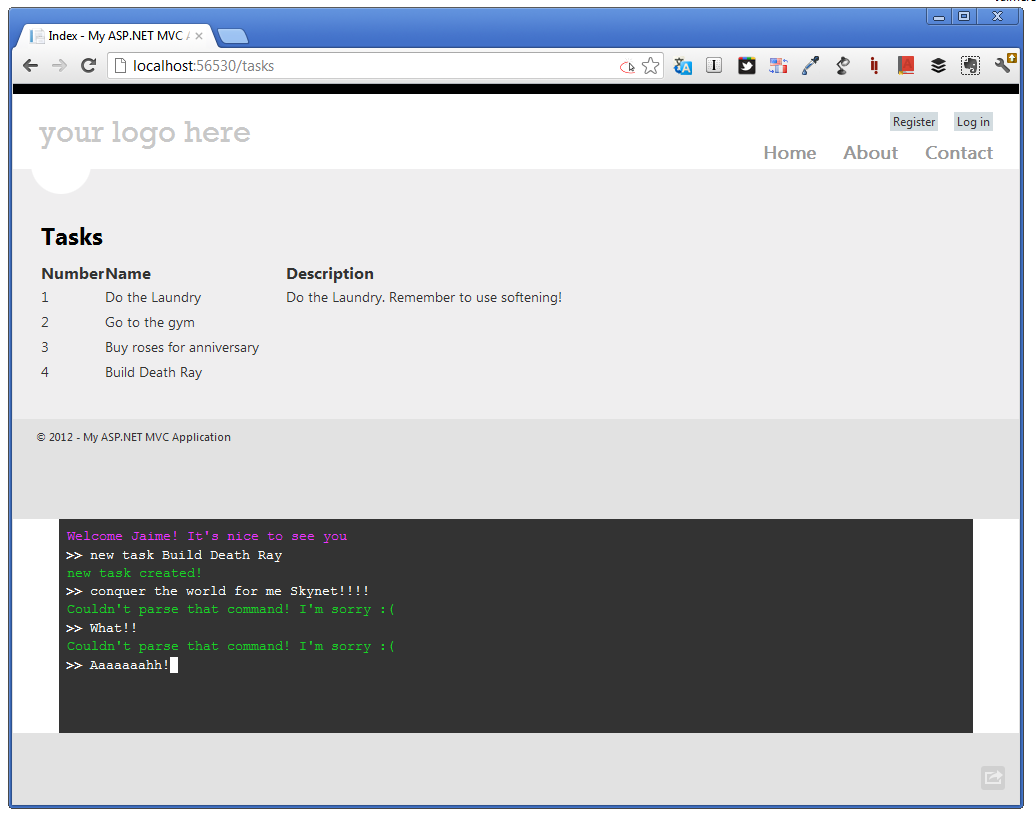 Yeah… That rule-the-world thingy did not work so well for me.

P.S: Don’t miss the outstanding episode of the Windows Developer Show @RyanLowdermilk and @tlowdermilk recorded from That Conference.

@vintharas My mission is to protect you.