Some weeks back I did an interview for the Frontmatter Podcast and the interview is out! I really enjoyed talking to Len Epp about my origin story, how I grew up in rural northern Spain among cows and sheep, my first computer, being a pro player in Age of Empires, my thoughts and life in university, the origins of vintharas and barbarianmeetscoding, my love for fantasy and scifi, joining Google, how I came up with JavaScript-mancy, my writing process, being a dad, etc…

If you haven’t listened to it, you can listen on the web or on your favorite podcast player. I think you’ll find it a fun listen. I do laugh for a great part of the interview.

And if you enjoyed the interview, then here are some more thoughts, comments, links to interesting stuff and embarrassing photos:

Origin Story. How I First Became Interested in Software

I was born in Blimea in the beautiful county of Asturias in northern Spain. This is how Asturias looks like the 3 days of the year when it doesn’t rain:

I would share some photos of me as a child but smartphones weren’t available in the 80s and I haven’t digitized any of my photos (You’ll have to visit my mum and ask her to dust off the voluminous family albums). I really enjoyed playing video games as a child, from Zelda in the NES to classic text adventures like Monkey Island, RPGs like Lands of Lore or strategy titles like Civilization, Dune, Master of Magic or Master of Orion. 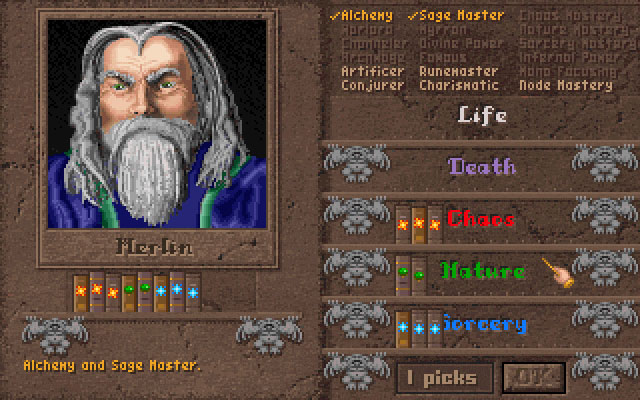 This is one of my favorite games of all time: Master of Magic.

I was very into IRC and through it I found that you could play games online. What??? Really? I became an habitual of the Age of Empires Spanish IRC channels where I embraced the community and became the leader of one of the top Spanish clans: TNT. The TNT Age of Empires clan website was probably my first contact with web development. It is amazing that this piece of 1990’s web design is still up there in the internets:

Yes... Just take a moment to suck this awesomeness in...

I later went to university in the lively city of Gijon where I spent living more of my university years and where I grew into an adult (yet extremely immature and quite spoiled) person. There was a lot of having fun, soul searching and little studying in those days. Here we’re a few seconds after bathing in the frozen northern sea at 4 a.m. in the morning: 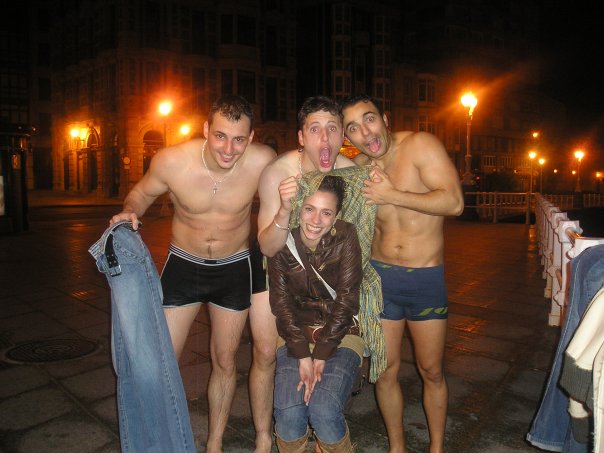 Nothing better to get some energy to continue partying than taking a bath in the frozen Cantabric sea.

A good reason why I didn’t go to classes was that I spent most of the night reading books and I’d go to be around 8 a.m. when everybody else would be waking up. My very favorite series of books during university where The Jack Aubrey and Stephen Maturin Series by Patrick Obrian. I really love those books. I’ve read all 20 of them 5 times which amounts to a considerable chunk of time I will never admit to. The movie Master and commander makes an amazing job at capturing and reflecting the feeling in the books and the interesting relationship between Stephen and Jack (if you haven’t seen it, I wholeheartedly recommend it):

My favorite TV series at the time was Firefly (I even got myself a tattoo of Serenity), and my university soundtrack would definitely be Hard Candy by the Counting Crows. Firefly and Serenity are still two of my favorite series/movies of all time and I patiently await for their return:

Take my love, take my land
Take me where I cannot stand
I don’t care, I’m still free
You can’t take the sky from me…

This was the book that brought me to Scandinavia: El Quinto Dia. In the interview I translated it literally from Spanish into English: The Fifth Day. It turns out the English version of the book is called The Swarm (We Spaniards have a habit of changing the titles of series, movies and books which sucks when trying to nerd out with people from other countries). Anyhow, The Swarm it’s a great sci-fi book on what awaits us in the deepest trenches of the ocean and has a beautiful description of Trondheim that made me infinitely curious about Scandinavia. 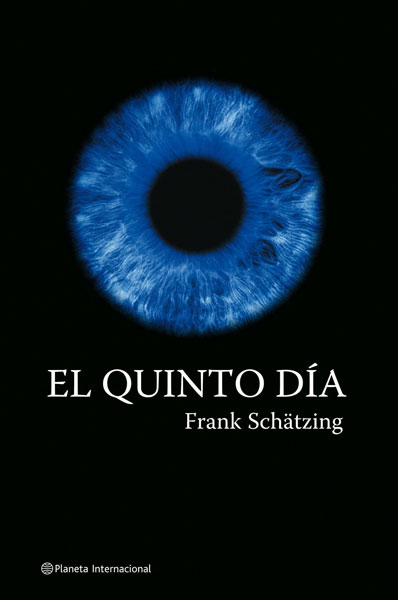 Really enjoyed this book. The descriptions of Trondheim where so compelling that I decided to make my Erasmus in Scandinavia.

I finished my studies in Sweden, in the university of Linköping through the Erasmus student exchange program. I have my father and sister to thank for this opportunity because even though I got a small grant to participate in this program, it didn’t cover the costs of living in Sweden by a long shot.

In Sweden, university students often live in “corridors”, which are student lodgings where 8(ish) students share a living room and a kitchen. It was in one of these student corridors where I met the love of my life, my beautiful wife Malin (She was the girl next door and I swear I had a slow-mo moment the first time I met her). 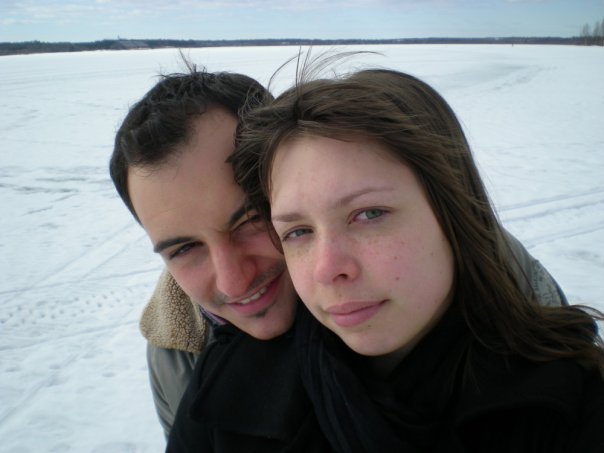 Malin and I when we were young and I still had some hair to my name.

My favorite part of Linköping is the super peaceful trail along the Stångån river. If you ever find yourself there, you’ll enjoy taking a promenade by the river.

The Origins Of Barbarian Meets Coding and Vintharas

Nerd+Art, the blog I used for inspiration for Barbarian meets coding, no longer exists. It is somewhat saddening that pages disappear from the face of the web without a trace (or almost, I was able to find it in the web archive).

I’ve always been a super nerd: from video games and comics, to role playing games (the ones where you role play an adventure like if you were an actor), to hardcore board games like Warhammer: Fantasy, Warhammer: 40K, Blood Bowl, Necromunda, etc, to reading tons and tons of Fantasy and Scifi. So I’m super stoked that we seem to have reached The Age of the Nerd with lots of cool fantasy and sci-fi becoming mainstream. 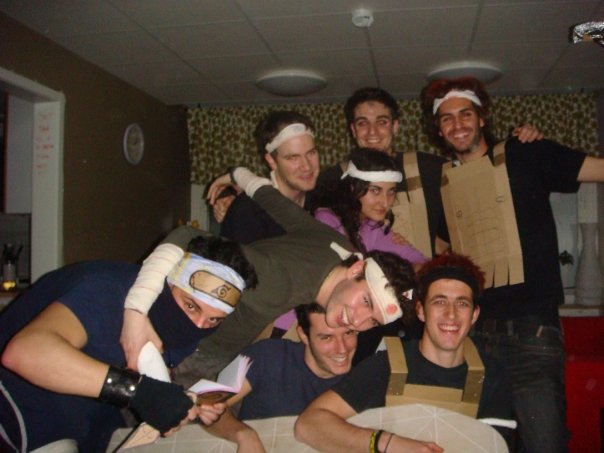 Jaime as Kakashi, if you look closely you may see my Sharingan. 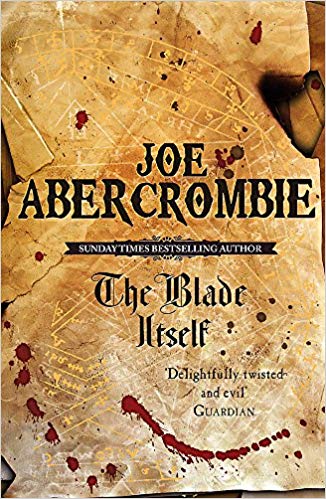 This book is awesome!

Barbarian meets coding started like a side-project to build my own blog engine. It featured a bunch of articles on Silverlight, WPF, and ASP.NET MVC on how I was building this blog. Later I moved to Octopress and I only ported over one of the articles from the previous blog incarnation: An introduction to the principles of Object Oriented Design (SOLID). I was in Octopress for aeons and I finally moved to Gatsby last Fall. There’s been several redesigns throughout the years, from a super minimalistic blog to something more in-your-face: 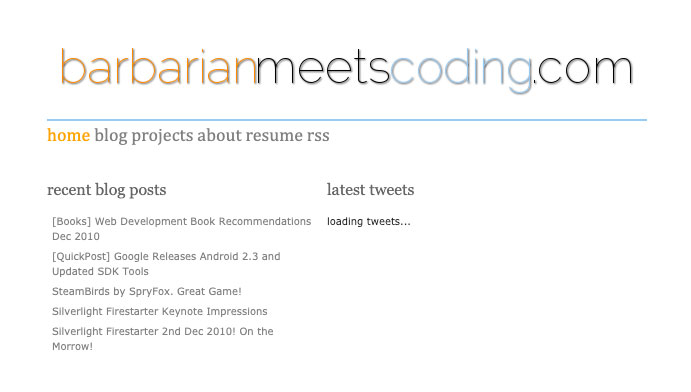 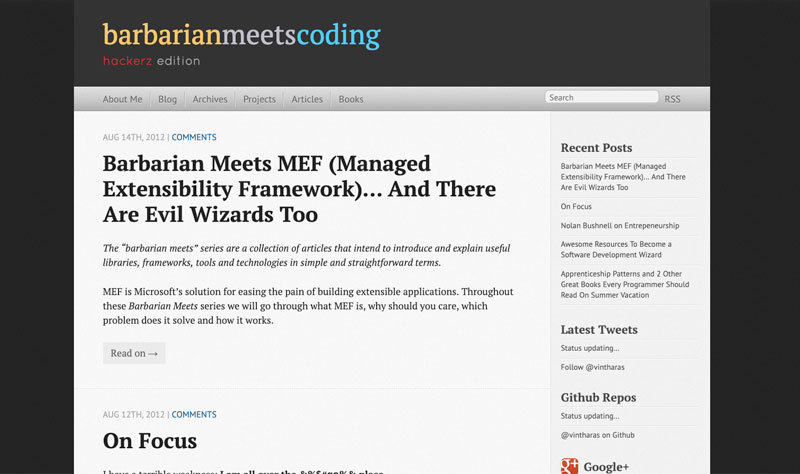 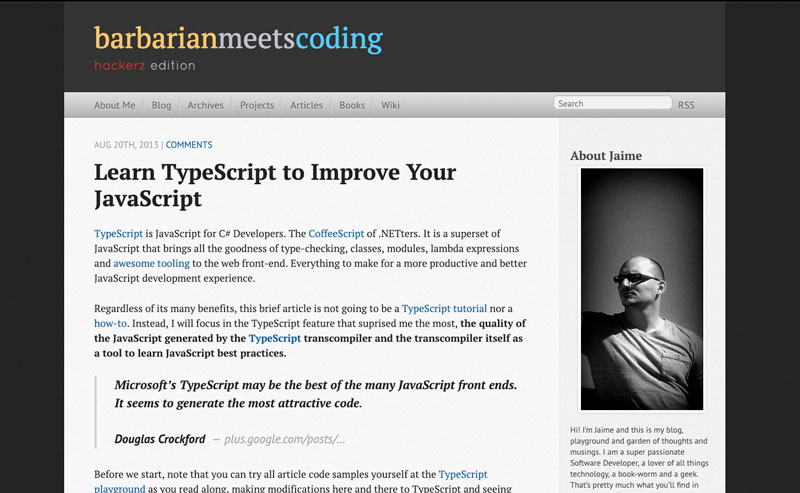 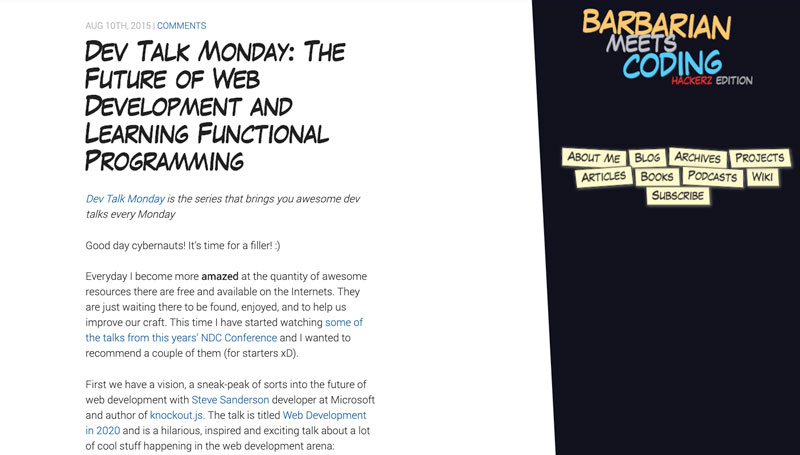 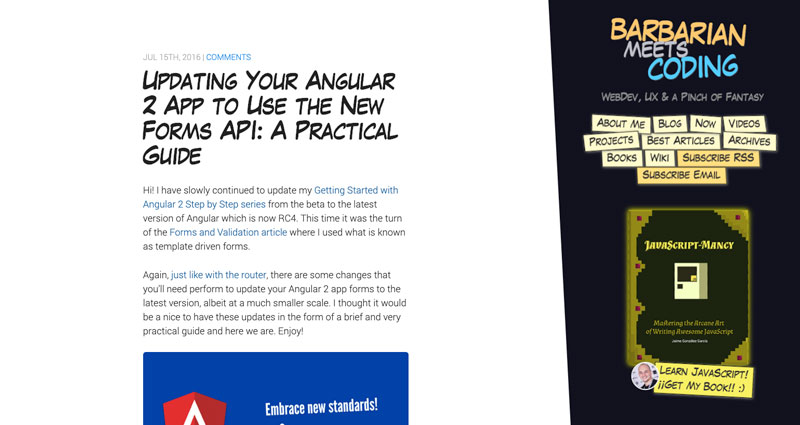 This Developer’s life, Rob conery and Scott Hanselman were all a huge inspiration in my early career as a sofware developer. Thank you!.

The MUD where vintharas was born was called Reinos de Leyenda (Kingdoms of Legend) and you can still play it! (Crazy!). If you’ve never played a MUD, you should try one, it is a blast!

Conan, The Barbarian and Conan, The Destroyer are still the shit. Conan knows what’s best in life…

Then it came the blog posts and finally the books themselves at javascriptmancy.com. 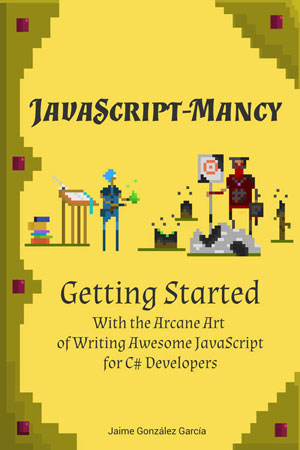 JavaScript-mancy: Getting Started with its updated cover. 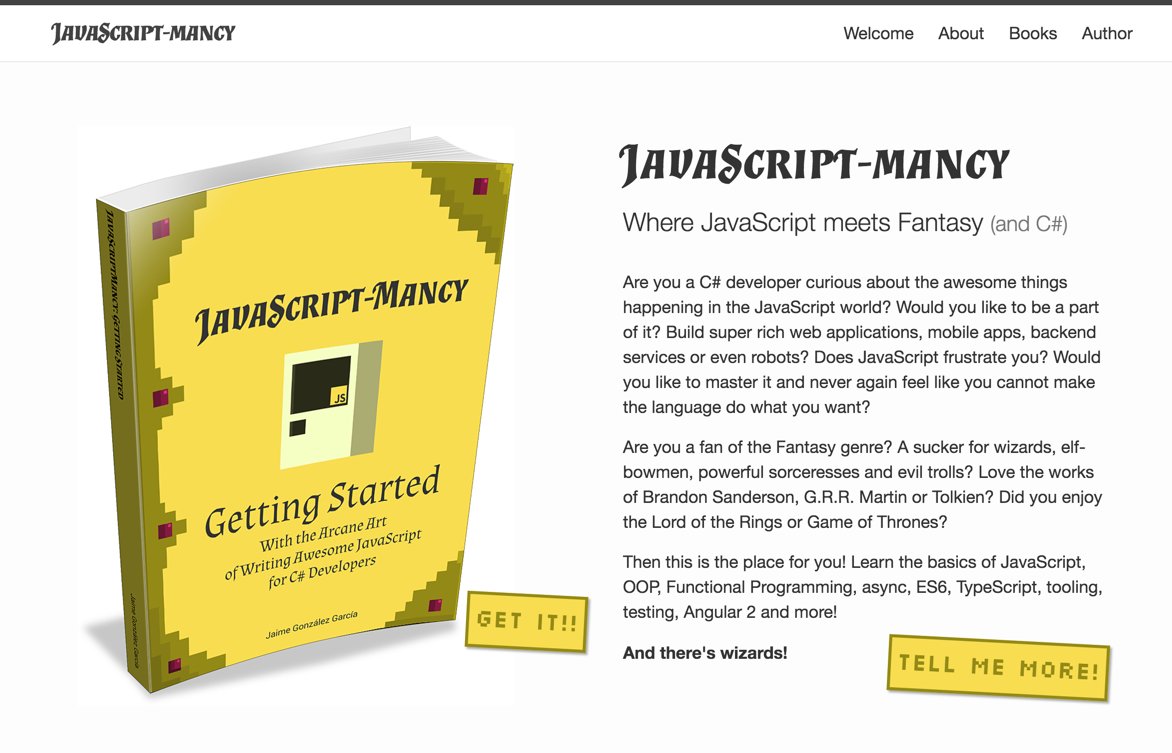 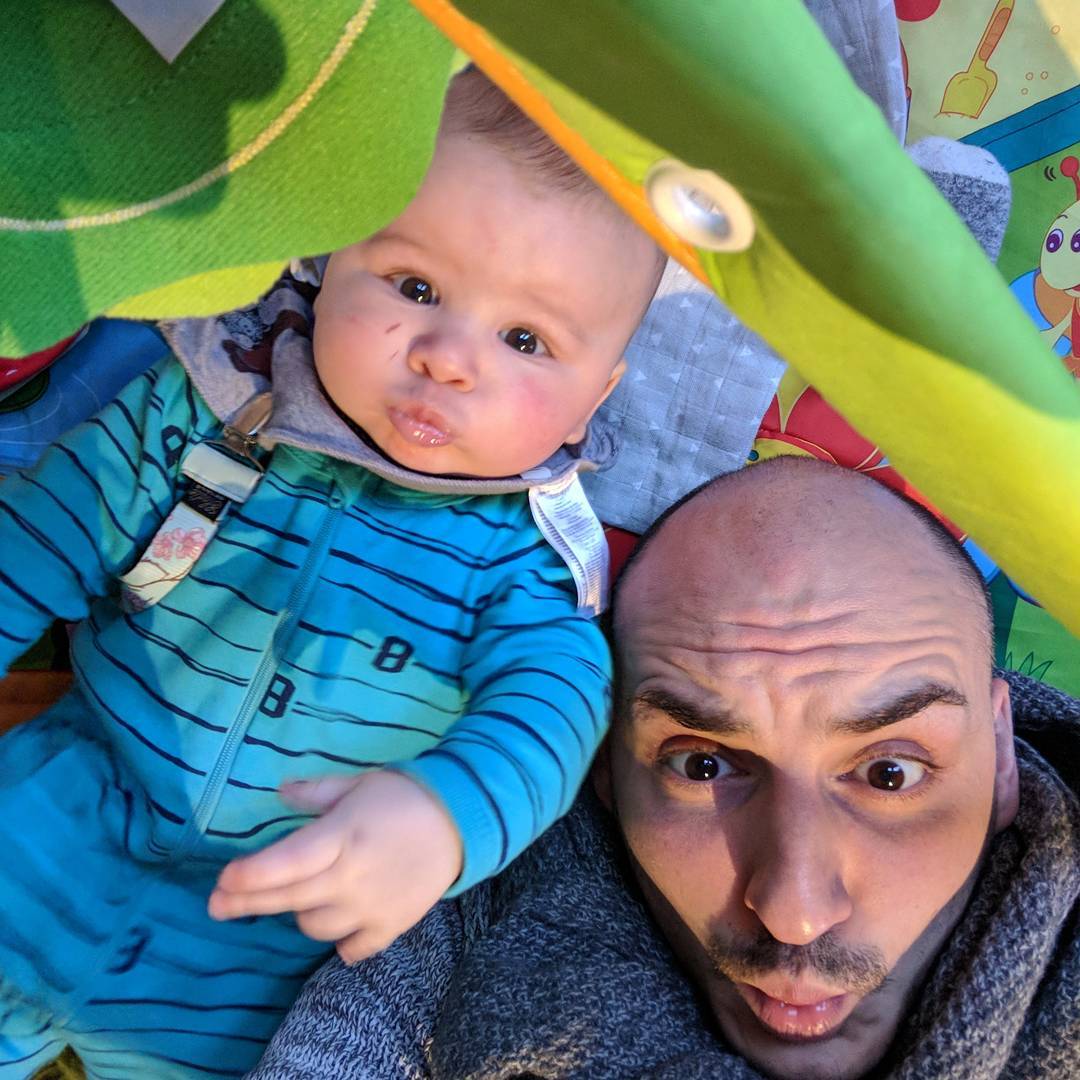 Teo and I love being clowns.

That’s it! Take care, hug a loved one and then go kick some ass!