Amazing… it’s been more than a month since I started this blog and I haven’t been able to write a single good, readable post. I’ve been pretty busy as usual, that’s true… but I wonder if part of the problem is the Fear to the Blank Page (figurativelly speaking since I didn’t even get near a text editor thinking about writing a post during this time) or perhaps… my natural inclination to do/write something great, or nothing at all.

Anyhow, I am going to force myself to write something, just for the pleasure of it. Let’s start with writing at least 3 times a week, write on whichever thing comes to mind, just to get some momentum and see where all this blogging thingy goes. Sometimes you need to start doing and let the inspiration follow.

… both She and I had high hopes after reading the books and were satisfied when the movie did deliver. To tell you the truth, I was so fixated in comparing the movie with the book, so focused in contrasting my imaginary representations with those displayed on the screen, that the movie flew pass my eyes. So much so that, when watching the final scene, I though so few time had passed that I was certain they would continue with the plot from the second book.

Anyhow, I was particularly interested in several central points which had caused the greatest emotional impact in me while reading the book. I was wondering… how will they put this together in the movie, how will they construct the narrative and build up momemtum to achieve the same reaction on the watcher, Suzanne Collins achieved within the book. Is there a magic formula that you can use to trigger human emotions? Is it intuition? Is it basic human psychology? I have no clue, but they did hit the mark indeed.

But not only that, Gary Ross nails the abhorrent contrast between the subjugated districts and the capitol, and the terrible reality of “The Hunger Games”- 24 children go in, 1 scarred kid goes out - while the cast themselves do an outstanding job and share a wonderful chemistry (there’s that moment between Peeta and Caesar Ficklerman that was just awesome). Which all results in a highly entertaining movie, that will probably become, together with its future sequels, one of those unforgettable SciFi/Fantasy series like The Lord of The Rings or Harry Potter. 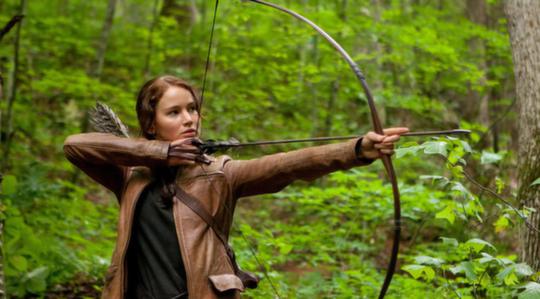 …And may the odds be ever in your favor! (that was an easy one hehe)