This is a preview of Wizards Use Vim my new crazy book that aims at making you a more productive developer using Vim. And Wizards.

Excellent! Now that you are aware of the most common pitfalls on the path to Vim mastery let’s get yourself setup. In this chapter you’ll learn how to get started with a vanilla development environment in Vim that you can use and improve throughout the rest of our journey.

Your Vim Setup Throughout This Book

In this book we are going to focus in the core features of Vim and build a strong foundation that you yourself can build upon. And for that, the best approach is to use a vanilla version of Vim stripped of any plugins and extraneous configurations. So I recommend you to use either Vim or Neovim for the remainder of the book.

A great combination to follow as you embark in this journey is to use:

That’s not only great practice but it will mean that you can start reaping the benefits and seeing an improvement in your day to day development from day one.

But Why then use Vim to learn instead of a Vim plugin? There’s a couple of reasons:

So Vim or Neovim? That is the question. Vim and Neovim are highly compatible, so much so that they can use the same configuration files and the same plugins. You’re welcome to use any of them but in this book we’ll use Neovim. That’s because I myself am fiery Warlock, and because of the following reasons:

But, of course, you are free to choose the path that you want and I’ll never know (or will I?).

Setup Neovim by following these steps:

The simplest way to get Neovim in OSX is to use Homebrew:

Install Neovim on Ubuntu or Debian

To install the latest version of Neovim in Ubuntu or Debian use the following:

The simplest way to install Neovim on Windows is to use the Chocolatey package manager. Type:

Install Neovim on Other Operative Systems

The Neovim Wiki has thorough instructions on how to install Neovim in lots and lots of operative systems, using a package manager or building from source. If your operative system is not one of the above, then please teleport to Neovim’s Wiki and follow the instructions.

Since we will be using Neovim which has a nice set of defaults from the get-go we could start using it right away. Nonetheless, there are a small number of optional additional configurations that will make Neovim user experience even better.

In order to configure Vim in a persistent fashion you need to create a configuration file (commonly referred to as vimrc). In Neovim this file is located at:

Create your vimrc, paste the following configuration and restart Neovim:

I’ve found that a nice color scheme has a huge impact in how comfortable newcomers are with Vim. If you care about aesthetics then try installing this popular color scheme based on Atom’s One Dark and One Light color schemes: vim-one

Start by creating a new package to add this plugin in your Neovim configuration folder as follows:

This will create a new package inside your Neovim configuration folder and will also change your current directory to the one you’ve just created.

Way Too Much Magic? Why That Folder?

Vim organizes plugins inside packages. A package is just a container for plugins and it is represented as a folder pack. In the previous example we have created a new package called wizardsusevim.

There are different types of plugins. The plugins under start are loaded when Vim starts. That's why we're placing our new colorscheme in that folder.

Too much info? Don't worry, you'll learn everything you need to know about plugins later within the book.

Now use git to clone the onedark GitHub repo inside that folder:

This is the equivalent to downloading the color scheme inside that package that you’ve just created.

Now run Neovim and you should be able to set the new colorscheme typing the following command:

To make the new color scheme persistent across sessions of Vim update your vimrc by adding the following configuration:

In later chapters, we’ll dive deeper into how to install and update plugins such as this one using a plugin manager. Plugin managers are way more convenient than creating folders and cloning repos by hand. But for now, this will do. Enjoy your colors!

Oh yeah! This book is going to have exercises. There’s nothing more conductive to learning than doing. So let’s do.

For starters I want you to:

This is a weird programming book. On one hand it is a awesome book on the superb vim text editor. On the other a spell book of sorts set in a world of fantasy where some people can wield JavaScript to affect the world around them. To essentially program the world and bend it to their will.

Welcome to the world of JavaScript-mancy, may you enjoy your stay, learn and have a lot of fun. 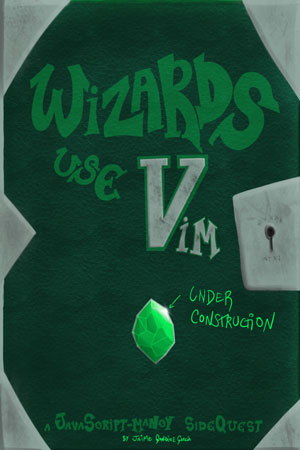 From Vim 8.0 onwards if you don’t have a vimrc Vim will load a default configuration that is friendlier to beginners (like enabling syntax highlihting). You can find more information via :h default.vim. This is another great example which shows that competition has improved Vim.