PICO-8 is a fantasy console to build, play and share tiny, cute games very reminiscent and evocative of the 8 bit era. What makes PICO-8 special is that it is a console and a complete game development environment all in one. PICO-8 comes with a code editor, a pixel editor, a map editor, a sound editor and a music editor, all in a single bundle of joy.

If you have a couple of minutes to spare the following video does an awesome job at explaining what’s so awesome about PICO-8:

When you start the PICO-8 fantasy console you see a satisfying start screen followed by an evocative ti-di-Di-DI sound and a command line. 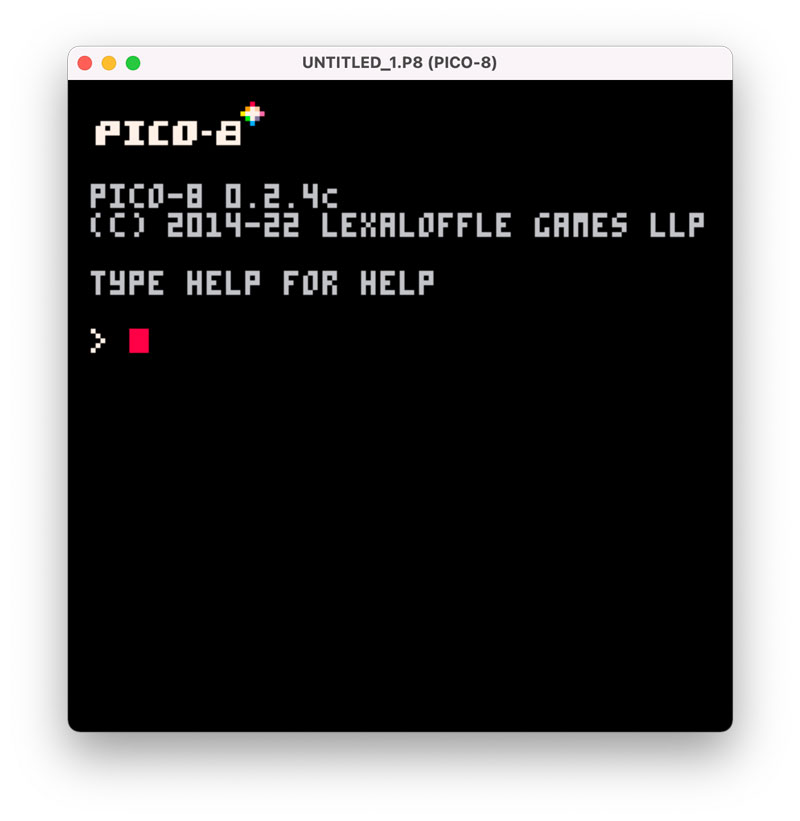 You’re in the PICO-8 command mode, here you can type different commands to either start developing your game or playing any game available for the PICO-8 fantasy console. Type splore and you’ll be brought to a kind of marketplace with thousands of games to peruse and play. Let’s wait with that for now and focus on the game development aspects of PICO-8.

And you’ll see that the HELLO WORLD string appears in the console. The command mode in PICO-8 acts like a REPL where you can experiment directly with any code that you’d want to use in an actual game. Try the following:

And a pink circle will appear on the screen. This is not however how you’ll normally write a game in PICO-8, nope, you’ll use a full-fledged text editor built right into PICO-8. Type ESC and you’ll be magically transported from the command mode into editor mode. 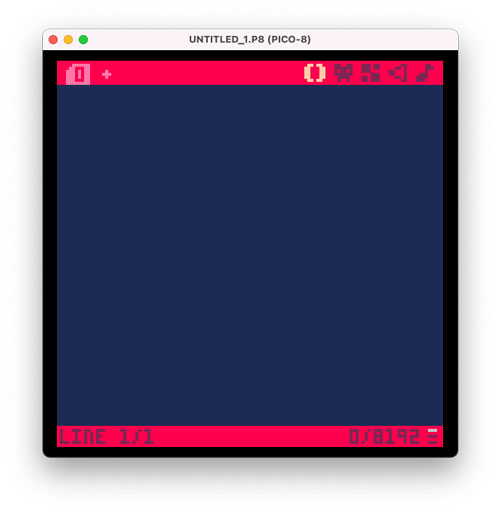 As it happens with many game engines a game is an infinite loop of gathering user input an then updating the game universe and drawing it to the screen for the player to see and interact with. This infinite loop is represented in PICO-8 by three functions:

A simple game to move a pink circle around the screen would look like this:

Once you’ve created your game, or as soon as you want you can save it:

Let’s make our game more exciting by changing the circle for an actual character. From the code editor we can jump into the pixel art editor by typing ALT+RIGHT (or clicking on its icon with the mouse)

Now we can go back to the editor with ALT+LEFT and update our _UPDATE function to draw the sprite.

Writing a Game for PICO-8

Here some great guides to help you learn PICO-8:

Splore and playing with PICO-8 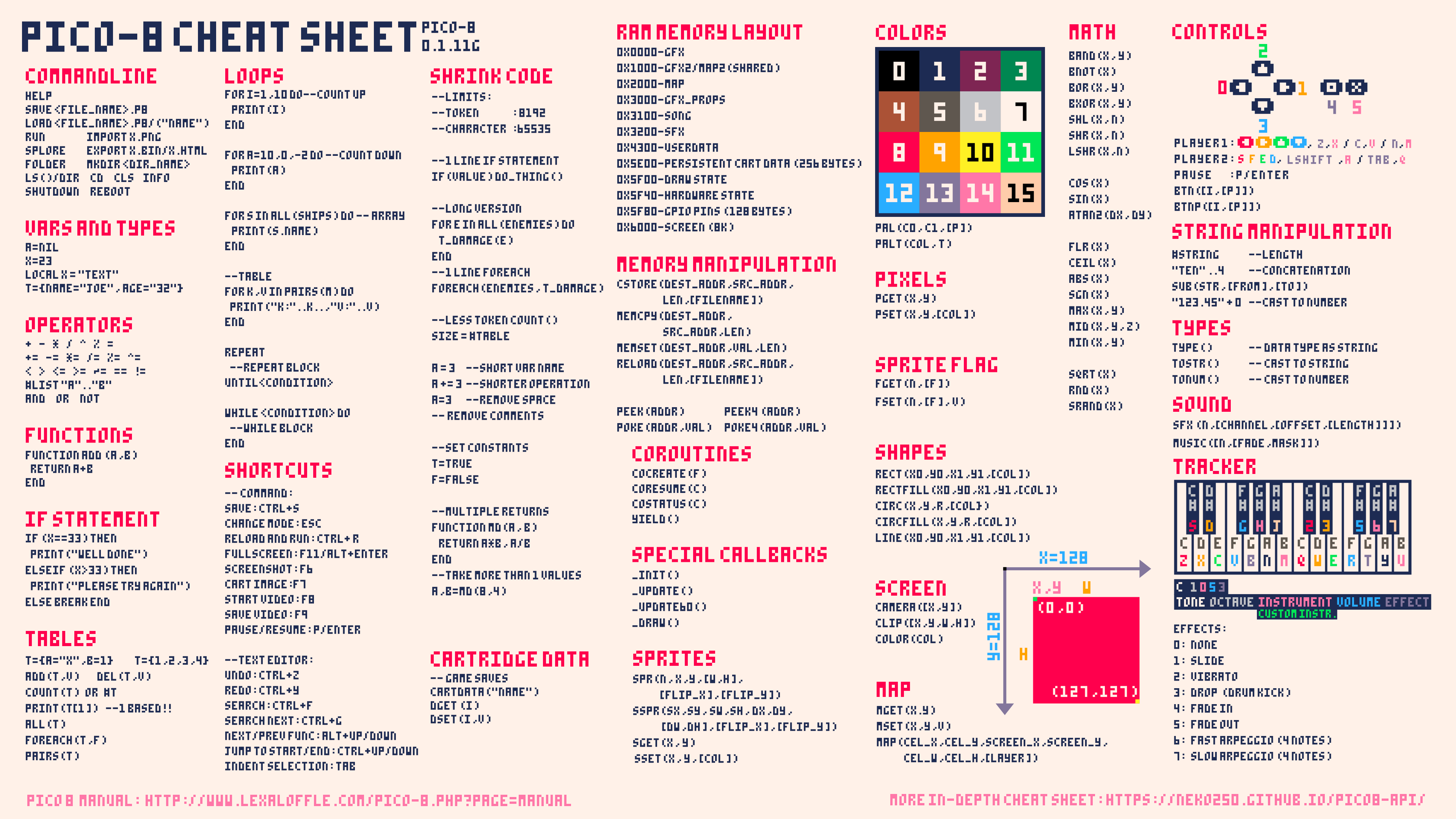 You can log information outside of PICO-H by using the printh function:

When working on your game there may be times when you run into issues and don’t know what’s the culprit. When that occurs a useful way to debug the problem is to:

Cartriges in PICO-8 are limited to 8192 tokens. A token in PICO-8 is defined as follows:

Each token is a word (e.g. variable name) or operator. Pairs of brackets, and strings each count as 1 token. commas, periods, LOCALs, semi-colons, ENDs, and comments are not counted.

It may happen during the development of your game that you’ll reach this limit. These are some heuristics to reduce the number of tokens:

Bear in mind that many of these techniques reduce the number of tokens while reducing the readablity of the code which may not be justified unless you really need those extra tokens.

Part of the beauty of PICO-8 is that you don’t need any other tool to build a game be it coding, sound, music or art other that PICO-8 itself. But if you still want to use your favorite code editor, art tool, etc you can do it.

This is a great video that illustrates all the content in this section (refer to the text below if you want a summarized version).

PICO-8 files mygame.p8 can be opened in any text editor.

Where are my PICO-8 files?

On Windows Pico-8 saves game data under "%AppData%/pico-8/carts". (The fastest way to find where the special AppData folder lives is to click on "Run" in the start menu and type in %AppData%)

On OSX it saves data in "~/Library/Application Support/pico-8/carts".

Open a p8 file and you’ll see that it is subdivided in sections, one for each part of the game

If you start changing your game’s code under the lua section you’ll see that when you load your cartridge within the PICO-8 console your code updates are there. This naive approach can work but you won’t have the ability to separate your code in tabs and might struggle with syntax highlighting. A better approach is to take advantage of lua imports to include an external lua file from the game #include main.lua:

When you’re using an external code editor the built-in token counter doesn’t work. Use the INFO command from the command mode to get an accurate count.

Working on your pixel art outside of PICO-8

To work on pixel art using a different art tool than the one built-in with PICO-8:

If you use the extended palette in PICO-8 there’ll be some colors that won’t match the initial 16 colors of a PICO-8 game. To get around that you need to create and load a new palette than matches your games palette, and make sure to setup your spritesheet to use an indexed palette.