In this series we’ll follow along as I use Svelte for the first time to build an app. I’ll use my go-to project1 to learn new frameworks: A Pomodoro Technique app, which is a little bit more involved than a TODO list in that it has at least a couple of components (a timer and a list of tasks) that need to interact with each other.

Haven't read the first article in this series? Then you may want to take a look, there's lots of resources to get you started with Svelte.

For you who are not familiar with the Pomodoro Technique a little bit of context may be in order. Let’s do a quick TLDR!

The Pomodoro Technique is a technique whose purpose is to help you become more productive by strengthening your focus and helping you learn about what makes you distracted.

In essence, the technique prescribes that you work on tasks in 25 minutes chunks of uninterrupted focus (a pomodoro unit of time). If you get distracted or someone interrupts you, you write down the cause of your distraction and start the pomodoro from the beginning. As you get better and better with this technique, you’ll become a master of your distractions. You will be able to remain focused for longer and complete more pomodoros, becoming more productive each day.

If you are interested, you can learn more about the this technique from its maker. I’ve found over the years that this technique has been specially helpful to push me to focus on the task at hand in those moments in life when it’s been the most difficult.

So an app that supports this technique needs to have, at the very least, a list of tasks that you want to get done during a day and a pomodoro timer that marks the periods of focused work. The app can be then expanded with a way to take notes of your frequent distractions, a way to track how you progress over time, etc, etc.

In this series of articles we will focus on developing an MVP and implement a list of tasks and the pomodoro timer.

Getting Started with Svelte

The easiest ways to get started with Svelte is by:

Although I think that going through the tutorial is really helpful to learn the syntax of Svelte and the things that are available, I think that the best way to learn something is by actually doing it in an environment as close to how it’d be to develop a Svelte app in the real world. You need to struggle solving problems yourself to really learn something. So that’s why we’ll follow step 3 and take advantage of the Svelte template to create the Pomodoro Technique app.

This creates a brand new Svelte project inside the il-pomodoro directory. We jump in, install the dependencies and run the development server:

Now we open a browser on localhost:5000 and let’s see what we get…

Setting up Your Editor

Svelte is a compiler-first framework which compiles .svelte files that represent Svelte components to build web applications. That special .svelte extension and the non Web Standard syntax that I’ve seen in the tutorials tells me that I’m going to need some additional support in my editor to handle Svelte. The Svelte blog has a nice article on how to setup your editor to work with Svelte. I typically work with either Vim or VSCode so let’s setup both of these editors to work with Svelte.

Setting Up VSCode to Work With Svelte

Setting Up Vim to Work With Svelte

For Vim the setup your editor article doesn’t provide a lot of support. It basically tells you to change the filetype of .svelte files to HTML. After some digging I found a couple of plugins that will make your Svelte experience much better in Vim and up to the standards of VSCode:

Ok, so now that we have our editors set up, let’s take a closer look at our new Svelte project.

The Lay of the Land

We open the il-pomodoro folder inside our editor and we see a bunch of files and folders:

The very interesting part for a beginner happens inside the src folder so that’s where we’ll look next. This folder contains just two files:

The file that comes forward as the entry point of our application is main.js:

Which creates a new Svelte App component and attachs it to the document.body with a single prop called title whose value is world.

Let’s look at what App is exactly:

I see! So a Svelte component is a bit of reusable UI which encapsulates the markup of a component (HTML), its behavior (JavaScript inside a <script> tag) and its look and feel (CSS inside the <style> tag). Cool! That makes sense.

If we home in into the markup we can understand what we’re seeing in the browser when we point it to localhost:5000:

The prop name is passed to the component on instantiation and it’s saved in that name variable:

Which is then propagated to the markup of the component and is rendered inside the h1 tag that we see in the browser. Cool! The slightly strange yet familiar export let name syntax has to be the way a Svelte component defines its API to the external world as props.

Let’s start tinkering with something simple, like adding a title for our first view of the app and binding it to some data. The initial template gives me a hint of how to do that. I just need to add a new variable to my component to contain that title. Since I have no use for the name variable in the original template I’ll just replace it:

And update main.js to inject the title of my app:

On a second thought, I don’t really need to expose that variable as a prop. We’re not expecting for the users of this component to change this title so we’ll just keep it as part of the internals of the component.

Let’s rewrite our App component to do this instead:

And finally I’ll update the HTML template to use the title instead of name:

Awesome! Let’s continue creating a very simple list of Tasks. Since this feels like a completely separate responsibility we’re going to put it in its own component.

I create a new file TaskList.svelte to represent that new component and add some markup so as few things as possible can go wrong when I use it from my App.svelte:

I add it to App.svelte:

And… It doesn’t work. Hmm… what am I doing wrong…

Both VSCode and the browser warn me of the following:

Which tells me two things:

Of course! So I add it to the App.svelte component: 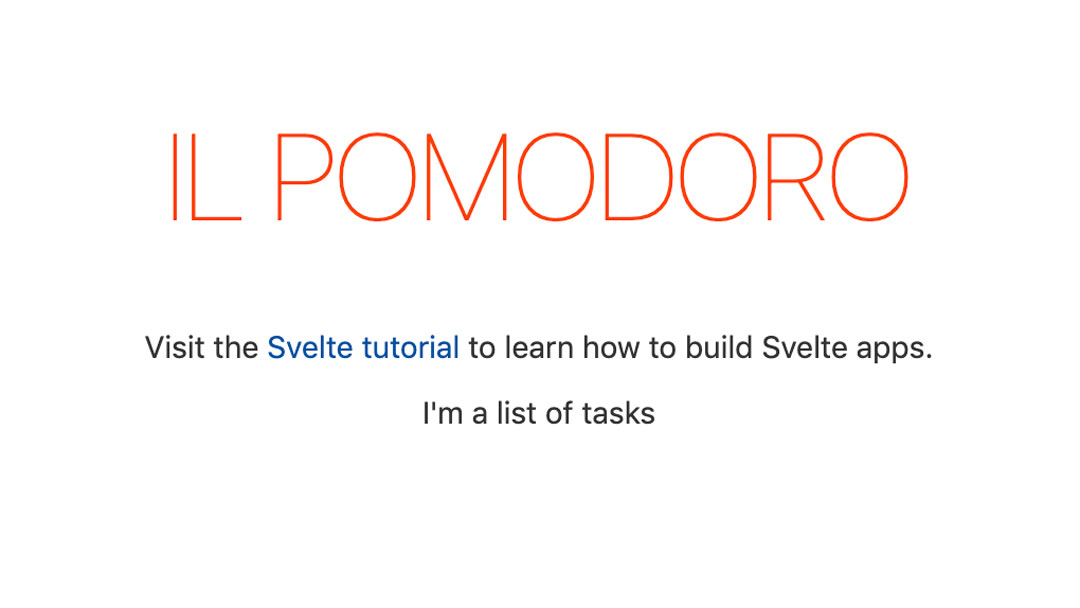 Now let’s add some tasks. My top 3 tasks for today are:

And now I need to show those on the screen within a list. Svelte has a special way to iterate over lists inside a template: the {#each} block.

So we iterate over each task in the list of tasks and put it inside an list item li element. We also remove the dots from the list because they look awful:

And this is what we get: 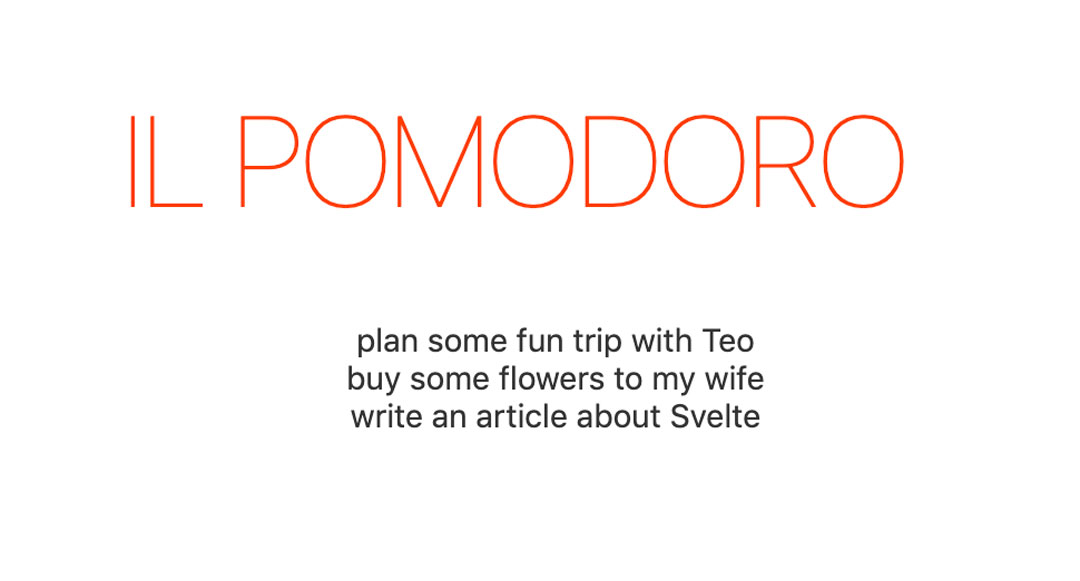 Looking for the source code for the pomodoro app?

Look no more! You can find it on GitHub ready to be cloned and enjoyed, or on the Svelte REPL where you can tinker with it right away.

Some Reflections So Far

Awesome! That was a quick way to get started with Svelte. Here are my impressions thus far:

And that’s all for today! Hope you enjoyed the article. Take care and await excited for more Svelte to be coming soon.

Are you an experienced Svelte user reading this? If so please don't hesitate to jump in and tell me how wrong I'm doing things :D I'll love to hear from you, and we'll all become the better for it.

After some troubleshooting I realized that following the recommendations in the Svelte blog I had previously setup Svelte with an autocommand to update the filetype of .svelte files to html:

This meant that coc-vim and the svelte syntax files weren’t applied because they expected a filetype of svelte. After removing the autocommand everything works just as good as in Visual Studio Code. Wihoo!